I've spent the last year learning hands-on about next-generation genome sequencing. I've found that each step in a genome project (assembly, scaffolding, annotation, analysis of gene content) is tightly coupled to the outcome of the previous step. For example consider you've assembled, scaffolded and subsequently annotated a microbial genome. Call this genome build v1.0. Subsequently a new assembly algorithm is published which performs 100% better on a given assembly metric. Do you completely reassemble your genome, producing genome build v2.0, in the hope of that the new algorithm can resolve troublesome repeat regions? Do you also then repeat the scaffolding and annotation steps based on the new contig sequences from the assembly software?

The pragmatic answer to this question is probably no. Repeating all this steps would accurately be described as a pain-in-the-ass and a step backwards in the project. The steps in a genomics projects could be described as a lava flow of data. Each assembly, scaffolding, annotation, and analysis step "freezes" the last step in place. A new layer of molten data is poured on top of the previous layer. To create v2.0 using new sequences or algorithms almost requires starting from scratch and repeating each step. The effort required may mean that repeating a step is non-trivial.

Assuming you have an infinite amount of time to go back, re-assemble, re-scaffold, and re-annotate your genome. How do you compare v2.0 with the original v1.0? Should you look at the differences in gene complement, contrast the nucleotide sequences, or both? Most likely you would start by examining the differences in the two genome sequences. But then how do you do this? Pairwise sequence alignment? This is less than ideal because you're using a probabilistic algorithm to compare two structures that you have essentially built. We should know the differences between v1.0 and v2.0 of a genome build because we've made both of them!

One final point to consider: imagine you accidentally delete the draft sequence for v2.0. You still have the contigs produced by the assembly software so you'll have to repeat the process of joining them together into a scaffold. This, however, is not simple because the contigs may have been cut-and-pasted together by hand. Since these scaffolding steps were performed manually it may not be possible to get back to the exact sequence for v2.0 using only the original contigs.

I recently produced a software tool that aims to solve two of these problems. Instead of cutting-and-pasting contigs together the scaffold is specified in a separate file using a domain specific language. This tool, which I've imaginatively called "Scaffolder," parses this "scaffold file", and performs the contig edits and joins required to produce the draft genome build. An example of this scaffold file looks something like this.

What does this achieve? First I think this makes determining how the scaffold is derived is much simpler. You can look at this file and see that sequence X is used here and sequence Y is used there, et cetera. This much easier to examine, and of course edit, contrasted with shifting blocks of text within 7 gigabases of nucleotide sequence. Using a separate scaffold file decouples the data (contigs) from the manipulation of the data (joining the contigs into a larger scaffold sequence).

This scaffold syntax makes two different versions of a genome easier to contrast - you can just use a Unix diff on the two scaffold files. This highlights when contigs are removed, added, or if their coordinates have been updated. Compare this with running diff on a huge block of nucleotide sequence or running a pairwise alignment algorithm. 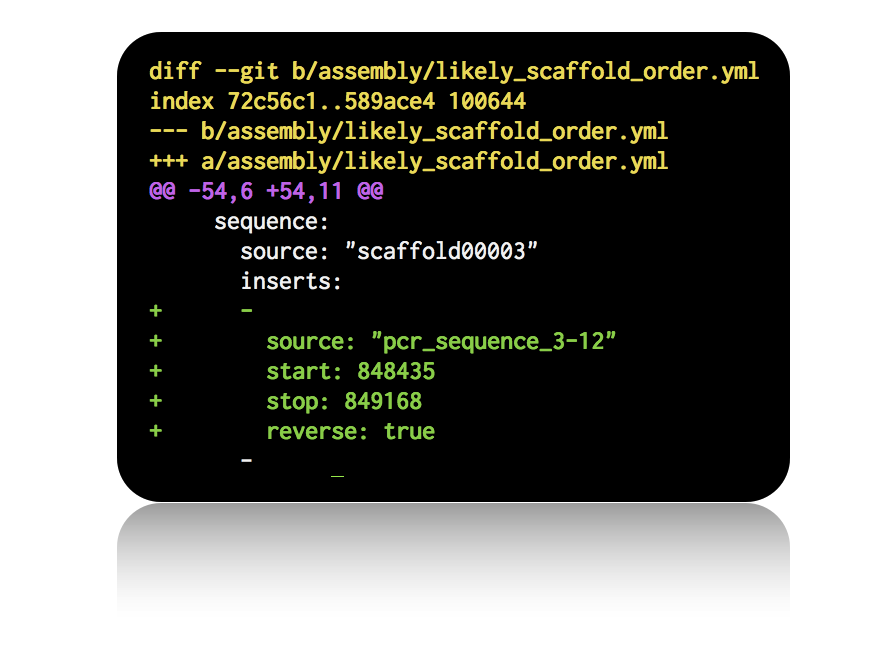 A further reason I wrote Scaffolder is to also make genome scaffolds reproducible and remove the manual element from joining contigs together. You can write your scaffold using the Scaffolder syntax and as long as you have the scaffold file and the set of sequences you can always reproduce it. Furthermore so can anyone else.

If you want to learn more about Scaffolder check out the website. The website has pages for getting started, the Scaffolder API and the Unix manual pages for command line interface.

We, in Hazel Barton's laboratory, have written a manuscript which more formally describes Scaffolder, and you can find a pre-print of it on Nature Precedings. We've submitted this manuscript to Open Research Computation (ORC) this journal, which if you haven't already read the recent blog posts describing it, aims to publish open-source scientific software with an emphasis on re-use and test-code coverage. Cameron Neylon, the editor-in-chief at ORC, has generously agreed to allow me to try and experiment with the peer-review process for the Scaffolder manuscript.

I would like Scaffolder to be useful for building genome sequence and I think a way towards this is to solicit feedback from the genomics community. Therefore I've started a question on BioStar asking how Scaffolder could be improved. Not only do I hope this will help improve Scaffolder but can perhaps examine different ways in which the web can be used as part of the peer-review process. Anyone can make a suggestion or critique then upvote, downvote and comment on other suggestions. These comments will then hopefully help inform the manuscript reviewers.