One of the earliest things I learned about next generation sequencing is to expect errors in the generated data. These errors include incorrect base substitution or incorrect estimation of regions of identical bases (homopolymers). When doing de novo genome assembly or genome resequencing these may not pose a problem as a majority consensus at each position can overrule these errors.

There are cases where inaccurate reads error do however cause a problem such as tag or marker sequencing. This is the study of a single gene from many different organisms with the goal of estimating polymorphisms or phylogeny. An example may be sequencing the same gene (e.g. 16S rRNA) from numerous microbes in the same environment. Another example is sequencing variations in viral genes to identify the the source of an epidemic. In both of these cases the single gene sequenced multiple times is the 'marker' of interest.

The advantage of this marker approach is that it generates a very large number of reads to allow surveying a population deeply. The problem is that sequencing errors can give false positives for diversity and variation. An extra base or a substitution generates a novel sequence and therefore a new genotypic signature. Furthermore when amplifying large quantities DNA even PCR errors can become relevant. This can be 'chimeras', where sequences mis-prime to each other generating a read composed of two origins. An additional rarer problem is PCR infidelity where base changes are introduced during the amplification process.

As the use of marker-based approaches increases, many articles are highlighting the need to identify and remove these poor quality reads. Not doing so can produce results biased by a large number of false positives leading to artefactually inflated diversity. If you are interested in the literature on this topic my citeulike page has some articles bookmarked.

Amplification and Sequencing Artefacts on 16S rRNA-Based Studies by Patrick D. Schloss, Dirk Gevers and Sarah L. Westcott. Part of this article focuses on identifying inaccurate reads based on features of the reads. These features include the quality of the read, length of the longest homopolymer and so forth. I highly recommend this paper and it was one of the favourite articles I read last year. This paper caught my attention because the authors considered a wide range of features to identify inaccurate reads. This lead me to think that these features could be applied as a machine learning classification problem: given a set of labels (1 for an inaccurate 'bad' read, 0 for an accurate 'good' read) and the set of features (homopolymer length, read quality, etc) can I predict whether the read is bad and should be discarded?

For this analysis I'll be using the mock community from the PyroNoise paper. This is an artificial community of 23 sequences that was 454 sequenced. I'm using this data because it is relatively simple to map the generated reads back to the original sequence. This thereby makes it straight forward to identify if a generated read is accurate. The short read archive identifier for this data is SRR013437.

I preprocessed this data by throwing away reads any shorter than 225bp. This value is 25bp for the primer and barcode and approximately 200bp of sequence that can be used for phylogenetic analysis after the barcode and primer are removed. The 200bp figure is approximate because there may be indels that are the natural differences between the sequences rather than sequencing error. The choice of 200bp is arbitrary and different cut-offs may yield different results. I followed this step by removing any reads containing ambiguous bases ('Ns') in the first 225bp. This preprocessing left 54370 reads to examine.

I generated two groups of data from the processed reads. The first was whether each read is inaccurate or not. This was resolved by grouping the reads into clusters based on identity. The top N clusters, where N is the number of sequences in the original mock community, are those reads which are correct, every other read was considered inaccurate.

The second data were the descriptive features from which to predict read accuracy. These data were divided into two groups the first was the longest homopolymer of each nucleotide type and the second was various quality metrics for each sequence. I also included original read length too. The distribution of these features for accurate and inaccurate reads looks as follows.

This data does not include all the features in Schloss et. al, for instance barcode and primer errors are not present. I selected only a subset of features as a starting point for a machine learning algorithm. Further features can be added in future. Given this feature set and accompanying accuracy labels, the next step was to create classifiers.

In the Schloss et. al article the authors compared several different heuristics for filtering and removing reads to improve quality. Two of these examined if the average quality score of a 50bp sliding window dropped below 35 and if there were homopolymers of any type greater than 8bp. In R this rule-based classifier might look as follows:

The result of the print.score function are the following metrics:

The second and third columns of this table show the probability of when a read is identified as inaccurate (positive) or accurate (negative) given whether the read is actually inaccurate or accurate. These are the positive predictive and negative predictive values. The table shows that approximately 2/3 of reads are correctly identified in both cases. The Matthews Correlation Coefficient (Wikipedia) shows the overall performance of the classifier with a value of 1.0 being the correct classification in every case, 0.0 is equivalent to random classification, and -1.0 is the wrong classification in every case. The remaining inaccuracy shows how many of the reads are inaccurate after filtering with the given classifier.

The first classifier I trained was a generalised logistic regression classifier. This uses a link function to map a linear regression to a value between 0 and 1. This regression can therefore be trained to classify whether reads are inaccurate or not. As a further step I used the glmnet package to fit an elastic net generalised logistic regression. This combines both L1 and L2 normalisation to penalise model coefficients with the aim of preventing model overfitting.

The logistic classifier performs better in correctly identifying inaccurate reads, almost 10pp (percentage points) better. At the same time there is a slight decrease in the number of reads incorrectly labelled as accurate: 0.7pp. This results in a greater remaining error rate in the filtered data: 1.7pp.

Not too much should be given to the interpretation of this figure as it is the result of training on only a single data set. This is apparent in the relatively low value of lambda. The figure does show that the minimum from a 50bp sliding window is the best predictor based on quality score. This is consistent with the results seen in Schloss et. al, the 10th percentile for minimum quality score over the length of the read also appears play a role in classification. Regarding homopolymer length the most important overall features associated with error appear to be homopolymers of G and C bases.

The random forest performs well in correctly identifying inaccurate reads with a probability of 0.833 of a read identified as inaccurate actually containing errors. The probability of correctly identifying accurate reads remains relatively unchanged. The improvement in the Matthews correlation coefficient is therefore mainly due to the improvement in accuracy of which bad reads are identified - fewer correct reads are thrown away.

Combinations of machine learning algorithms often perform better than the sum of the parts. The 'ensemble' approaches may show improved performance when each of the classifiers models the problem domain with a different structure. For instance a regression classifier models the problem parametrically and linearly while a random forest is non-parametric and can find complex interactions. Combining two different algorithms of this type can, in some cases, combine the best of both worlds. I therefore created an ensemble classifier based on the random forest and logistic regression classifiers above. The results of this are as follows: 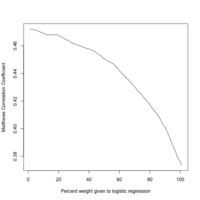 These current classifiers have not been tested for predictive power only the degree to which can explain the difference in between good and bad reads in a single data set. The predictive power should be tested by cross validation against multiple data from different experiments and sequencing centres. I would expect the Matthews correlation coefficients for the ML classifiers would be less than the values shown above because these classifiers have most likely overfit to this single data set.

As I wrote earlier, only a subset of features have been examined. For instance errors in the barcode and primer sequence have not been included. The Schloss et. al paper showed that these are also useful for identifying inaccurate reads. Therefore I think additional work should include features such as these. One machine learning approach throws as many features as possible at the problem and then uses normalisation to identify those with the most predictive power.

Given all of these caveats, there does appear to be a hard ceiling on the probability of identifying correct reads. Regardless of which classifier is used the probability of correctly identifying accurate reads is around 0.66. I hypothesise that this might be a problem of identifying chimeras - those sequences that form during the PCR step prior to sequencing. As chimeras are formed prior to sequencing, it could be considered extremely hard to identify them based on features associated with sequencing. Tools such as Uchime and Perseus should be combined in a pipeline to identify chimeras.

The main results of this small analysis appears to be to be the possibility of an increase in accuracy when identifying inaccurate reads for discarding. This, very initial, work suggests that using machine learning may be useful for increasing precision and therefore translate into fewer accurate reads being thrown away.