A previous post described training machine learning classifiers to filter inaccurate reads in 16S-based metagenomic studies. This analysis was based on available mock community data - where an known set of 16S genes is sequenced and the generated reads compared to the original sequences. The value of using a mock community is that knowing the original sequences allows you to identify the types of errors you are observing in the output data. The method I previously used to find the accurate reads using the mock community data was as follows:

The result of this method should be N unique reads in the output data and each unique read should then correspond to one of the mock community sequences. This approach assumes that after removing up to 4 single base errors and indels, the remaining most abundant unique read for each mock community sequence should be the correct one. This assumption can be described another way: any novel sequences generated from infidelity in the PCR or sequencing steps should not produce more copies than that of the original correct sequence.

I built this workflow with a combination of mothur and shell scripting. There is a gist on github illustrating this method of identifying correct reads based on abundance.

This approach bothered me because it does not actually compare the reads that I specify as correct against the original mock community. Therefore before pursing further machine learning approaches I aimed to first confirm the reads identified as accurate exactly match the mock community sequences.

I used a simple approach to identify accurate reads in the 454 data: trim each mock community sequence to a 100bp substring and see how many reads contained this substring. I started with the divergent mock community data from Quince et. al 2009. This is the same data I used for machine learning approach to filtering inaccurate reads. I trimmed the community sequences to 100bp beginning at 5' end and searched the generated read data for exact matching substrings using grep. The following code illustrates this approach with the resulting number of matches.

This highlights that, for two of these mock community sequences, there appear to be insertions in the 5' ends of the most abundant reads. These differences prevent exact substring matches to the mock community sequence. I considered if this was the case for the for further downstream sequence by repeating this process with a 100bp substring 50bp downstream from the 5' end.

This shows that using a substring 50bp further downstream finds a larger number of exact matches in the reads. The following figure compares the difference in the substring matches. The figure is on a logarithmic scale. 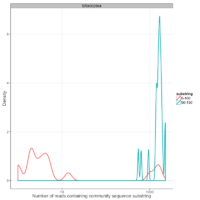 This examined only a single 454 run and one which was generated in 2009. I therefore considered further additional data determine if I observed this result again. The human microbiome project (HMP) has a pilot study which compares a single mock community with the output from several different sequencing centres. I repeated the above analysis with 91 from 19 of these sequencing experiments. I used a sample of 9 experiments to reduce overall analysis time.

The major difference with analysing these data is that there is no specific set of mock community sequences. The HMP instead used three pairs of primers to create amplicons from 22 genomes2. I therefore created the 16S mock community3 by simulating PCR in silico using the primers and corresponding genomes. I then tested the HMP generated reads against this mock community using the same approach as before. The following figure compares the distribution of matching reads for the different substrings of the mock community. 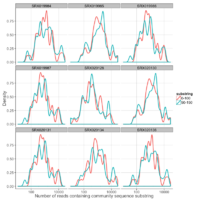 This figure is harder to interpret because the two distributions overlap. There is less of a clear difference as to whether 5' trimming results in a greater number of matches to the community substring. The following figure instead compares the difference in total number of matching reads for 5' trimming versus no trimming. A larger value equates to a greater the number of substring-matching reads for the 5' trimmed sequence versus the untrimmed sequence. 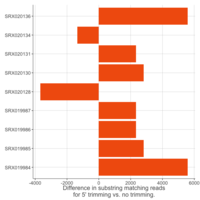 The use of 3' trimming in marker-based metagenomics is common. I am not familiar with any articles showing that 5' trimming may improve read-fidelity however. I would be interested if anyone can highlight similar approaches. I think it may also be work considering if this 5' trimming could be related to chimerism.

Trimming the 5' end should not however be used in every case without prior consideration. Instead I believe a quality-control mock community should be added to each sequencing run to assess whether this is necessary. This way both 5' and 3' trimming could be tuned to each specific sequencing run. A similar point is argued in Schloss et. al 2011:

We have shown that even when sequencing centers follow the same procedures there is variation between and more importantly, within centers. The inclusion of a mock community sample on each sequencing run can be used to calculate the rate of chimerism, sequencing error rate, and drift in the representation of a community structure.

If machine learning approaches are to be used to filter incorrect reads then the training data must be as accurate as possible. This means that every effort should be made to correctly label the accurate reads in the training data. Therefore I believe a constructing a machine learning filter may require the optimisation of two factors: how much of each read needs to be trimmed and how accurately the remaining reads can be accurately filtered for inaccuracy. This would balance read length for phylogenetic analysis against how may errors in the generated reads can be tolerated.